Paul Moxon shares with us why he loves letterpress from all aspects as a printer: the fascination, the community spirit & camaraderie, and the beauty that letterpress brings into his life.

Letterpress printing specifically, and the book arts in general, are the nexus of my interest in language, literature, biography, history, and mechanics. After thirty years in graphic arts, my enthusiasm for letterpress remains. As a designer, the physical labor of printing can clarify the message, inform my digital work, and lift my spirits. As a publisher, controlling the means of production is a point of pride.

I am fascinated by the vintage equipment, tools, and accouterments made with precision and inherent beauty. And it thrills me whenever I can purchase materials made today with the same diligent care. Eventually, I became an instructor and mechanic to help sustain this vibrant community paying it forward for all those who helped me along the way.

Most people know that Paul also developed and continues to moderate the Vandercook Press web page. It’s the first place to visit for significant info, photos and answers to questions on Vandercook presses and similar brands of flatbed cylinder proof presses. He has added greatly to our appreciation and preservation of these presses.

David Clifford of the Canadian-based Black Stone Press recounts how he started working in printing and then falling in love with the beauty and the craft that is letterpress.

In the fifties, practically all printing was letterpress printing. In October 1951, I started my six year apprenticeship as a machine operator (machine minder), at the age of fifteen. It was at a small printer in London at the Borough near Elephant and Castle. There were three compositors setting type and in the basement, the machine room had two Wharfedales (cylinder presses), a Heidelberg Platen and a hand-fed Arab Platen. It was a little limited, fortunately, my apprenticeship agreement meant that I attended a technical school (Camberwell School of Arts) once a week to learn the trade.

After the six years had gone I worked in a few different printer shops. One of them was Ever-Ready Battery Print Works. There were about eighteen to twenty machines printing the big battery covers on card stock. Another printer specialized in cigarette cards. Roughly 1.25” x 2.5” cards, these were put in cigarette packages to make them stiffer. They were very collectible with fifty cards to a sheet printed in four-color process, one color at a time. Subjects included: butterflies, birds, flowers, sports, etc. etc. These were printed on small Dutch cylinder machines – Glockners (to get an idea of the trading cards visit this link).

In 1962, I moved to Nice, France and worked at the biggest printer in Nice: Imprimerie Meyerbeer. There were fifty to sixty workers. Presses included two hand fed big Miehles, Albert cylinder presses and Heidelberg platens. After the student riots and worker strikes in 1968, I felt it was time to move. In 1970, Vancouver, Canada was chosen. Not much letterpress printing was to be found in Vancouver, so I had to run offset presses (ugh), which have never been my favorite – too many chemicals. I spent about twenty years as a Graphic Designer and in 1996 Black Stone Press was born with one Heidelberg and polymer plates made by hand. Now there are three Heidelbergs, a Golding Platen, a Vandercook 4 and an 1846 Albion, crown size hand press.

I still work a few hours a week, but do not have the strength I had before. Sixty-eight years of printing, I am worn out. Fortunately, my daughter, Yasmine has taken over. She keeps everything running.

At the beginning, printing was just a job and I couldn’t wait to get off work. But the last thirty years I really appreciate the joy of letterpress printing.

Letterpress leaves a lasting impression on a young printer who now loves to kindle this spark in others. Allison Chapman, of Ohio-based Igloo Letterpress, shares with us how a family tradition lives on in her press shop and how she came to love letterpress.

I was lucky enough to learn about letterpress printing from my grandad, Mark Gibson.  He became a hobby printer in the 1960s after finding a Johnson Peerless platen press in a neighbor’s barn.  He restored the press, joined the Amalgamated Printer’s Association and was hooked.  As his “assistant” growing up, I loved to help with whatever projects he was working on.  I soon had a small toy press that I could use while he was printing.  As a kid, I loved letterpress because of the sound of the press running, the smell of ink and paper and the pleasure of repetitive tasks.

As soon as I got to college I realized how special the time in his print shop had been.  I took every printmaking class and started making up independent projects so that would allow me continued access to the print studio.  I successfully schemed and created a study away experience that focused on letterpress history.  I began an internship under Elizabeth Harris and Stan Nelson at the Smithsonian Institution’s National Museum of American History.  At the time there was an amazing demonstration area in the museum where I learned how to knock up ink balls, change the frisket on the common press and fold newspaper hats. 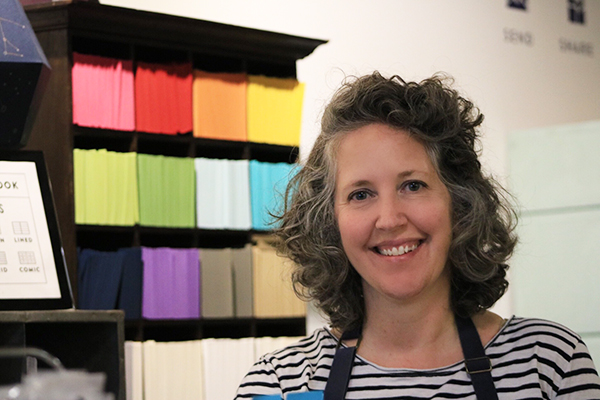 That internship cemented my love of letterpress and of making.  I wanted to read and write about the history of printing, but I also wanted to increase my skills.  I began working at Minnesota Center for Book Arts and learned how contemporary artists were using letterpress and bookbinding.  The 11 years I spent working at MCBA heightened my appreciation for the finer points of the craft.  I became a better printer and bookbinder through the instruction I received and the projects I completed in my home printshop.

A surprise move from Minnesota to Ohio forced me to move the presses out of the house and into a storefront.  This became an accidentally wonderful way to build a community for myself in my new town.  I quickly found an active design community that welcomed Igloo as a print resource.  To build the business I ramped up custom work for local customers and launched a wholesale line at the National Stationery Show.  As production increased I brought in extra hands through talented interns and contractors.  Eventually, I gathered a talented crew of artists and makers to join Igloo’s staff.  Through our work as letterpress printers and bookbinders, we encourage a love of making and an appreciation for fine craft.  Visitors are welcomed to see the presses in action as they shop in our store and are encouraged to stop & make a journal at our book bar or sign up for a class to create their own project. 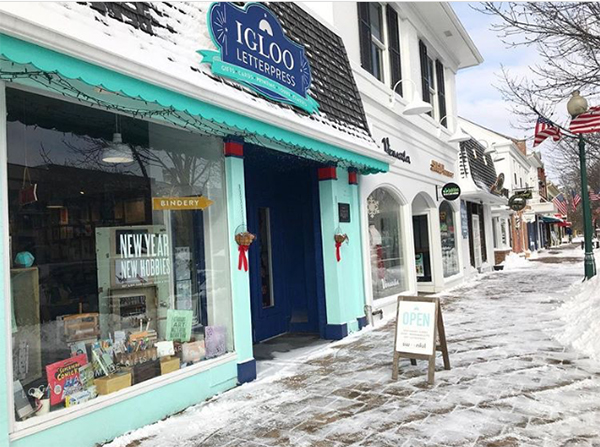 After 22 years of collecting and teaching, I still love letterpress and find joy in making something new every day.

Smitten for letterpress? We’d love to hear from you! Share your story in the comments below!

I first learned about letterpress at the West Coast Print Center, where I was employed working in the camera department. There was a Vandercook Proof Press and Joanna Drucker was printing a book. I was enchanted and watched closely, the process seemed both logical and magical. Sometime after I left the Print Center I began to work for Adrian Wilson and that is when I really fell for the craft. What was it, the smells; the texture of papers; the rhythm quiet, thoughtful and methodical; the mastery of a machine that changed history? And then to see that all the patience and attention gives way to page; a broadside; a book that is simply beautiful to hold and to read. Why do I love letterpress, I think because the craft encourages the practitioner to give oneself over to the process and that giving over shows a willingness to try for perfection, again and again.

Margery Cantor has designed books for many presses in California, such as the Stanford University Press and the University of California Press.  She is currently at The Impermanent Press in Norwich, Vermont and is still printing.  A recent work is the letterpress version of Illustrated by Lynd Ward: From the Collection of Robert Dance (The Grolier Club).

Passionate about printing? Head-over-heels for letterpress? Let us know why you are love with letterpress in the comments below!