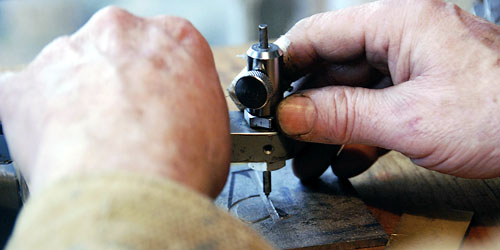 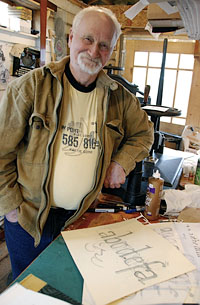 END_OF_DOCUMENT_TOKEN_TO_BE_REPLACED

Excerpts are from Leaves from the Pie Tree,an autobiographical account of Jim Rimmer’s life with type. This book was printed by Jim Rimmer at Pie Tree Press, 2006 and is available at Wessel & Lieberman.

When Grandfather heard I was not too hot on the idea of becoming an apprentice compositor he called for me to come and see him. I arrived at the Duke Street house and found Grandfather in the backyard, hoeing potatoes. He propped the hoe in the crotch of the plum tree. In the cool green of his garden, he tamped his old briar, took a draw and started in his gentle voice: I hear you want to go back to school. Now that is a fine thing, to have an education behind you, but there are different ways to get educated; and they are all good education. You have a fine opportunity to have a trade. Printing is an old and respected craft. There is art in printing. You are artistic; you will have a chance to use it. At one time printers were the only people aside from nobility who were allowed to carry a sword. He took a pause to relight his gurgling pipe, and midst the perfume of the rhubarb and loganberries he continued: and if yer don’t take the job I’ll kick yer little arse all the way up Duke Street! I accepted my Grandfather’s offer on the spot. My fated collision with printing has been quite plainly one of the greatest blessings in a charmed life. I can’t think what direction life would have taken had my father and grandfather not interceded in my desire to attend formal art classes. I can’t place a value on what six years of apprenticeship training gave me, particularly the typefounding portion of it.

END_OF_DOCUMENT_TOKEN_TO_BE_REPLACED

Jim Rimmer’s shop is nestled in a yard behind his Victorian house on a quiet street in a suburb of Vancouver, BC. A quaint letterpress placard on the door instructs visitors to walk around. The entrance is graced by a type specimen of Duensing Titling, carved in stone by Rimmer. A tour of this hard working shop, along with work samples and stories shared by Rimmer, makes it clear why he is considered a living national treasure in Canada. There just aren’t many people who can cast type any more, and even fewer who can take the mere idea of a font then bring that idea to form in lead, tin and antimony, ready to print once it cools off. When Fred Goudy was doing such a thing for his Village Press, he had a lot of equipment and craftsmen ready to lend well-trained, experienced hands.

Rimmer has a network of typecasters through the American Typecasting Fellowship (despite the name, an international group) that share ideas and technical knowledge in keeping this craft alive, and member Rich Hopkins sums up Rimmer’s very special skill set: “Jim is truly unique in that he has such an “instant” design flair and has a mastery of all those neat devices he uses in cutting his types.”

In 2006, after 50 years of printing, designing, typecasting and teaching Rimmer was joined by friends and colleagues to celebrate, complete with an introduction by Robert Bringhurst. Dubbed “Rimmerfest”, the event marked Jim Rimmer’s contributions to a craft he continues to keep vital.

Following is a Q&A interview. Also check out Bob McCamant’s article on Jim Rimmer as well as excerpts from Rimmer’s autobiographical book “Leaves from the Pie Tree.”