Excerpts are from Leaves from the Pie Tree,an autobiographical account of Jim Rimmer’s life with type. This book was printed by Jim Rimmer at Pie Tree Press, 2006 and is available at Wessel & Lieberman.

When Grandfather heard I was not too hot on the idea of becoming an apprentice compositor he called for me to come and see him. I arrived at the Duke Street house and found Grandfather in the backyard, hoeing potatoes. He propped the hoe in the crotch of the plum tree. In the cool green of his garden, he tamped his old briar, took a draw and started in his gentle voice: I hear you want to go back to school. Now that is a fine thing, to have an education behind you, but there are different ways to get educated; and they are all good education. You have a fine opportunity to have a trade. Printing is an old and respected craft. There is art in printing. You are artistic; you will have a chance to use it. At one time printers were the only people aside from nobility who were allowed to carry a sword. He took a pause to relight his gurgling pipe, and midst the perfume of the rhubarb and loganberries he continued: and if yer don’t take the job I’ll kick yer little arse all the way up Duke Street! I accepted my Grandfather’s offer on the spot. My fated collision with printing has been quite plainly one of the greatest blessings in a charmed life. I can’t think what direction life would have taken had my father and grandfather not interceded in my desire to attend formal art classes. I can’t place a value on what six years of apprenticeship training gave me, particularly the typefounding portion of it. 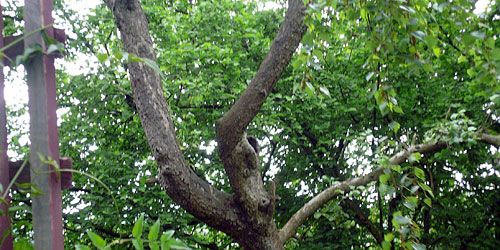 Pie Tree Press is named after this “ancient snagly” old tree in our backyard, from which a couple of lovely old sister ladies who used to live next door to us would bake apple pies. They always referred to it as the Pie Tree. (photo: Jessica Spring)

Printing, illustration, type design, typefounding, type engraving, bookbinding, graphic design, stonecutting and digital type design are things that have occupied me, and do to this, my seventy-second year. Excepting the bit of letter-cutting in stone, these occupations have put dinner on the table; but it has been my good fortune to have loved the work. A very big surprise came upon me in the mid-nineties when the fickle advertising business discovered it couldn’t live without linocuts represented in annual reports, billboards and potato sacks!

School was a thing I was never very good at. I was afflicted with a learning disability, a run-away imagination and a thickish smattering of laziness. Dyslexia was as yet unknown, but unfortunately for a few like me the label “stupid” was not, so I was for the greater part passed off as being a little slow. In spite of it all, I had a fine left hand and did well in language class when we were occasionally given the liberty to write a short story. My stories were over the top; while the brain team documented in thrusting prose their summer vacation in Moosejaw, or how they helped paint the garage, my stories involved wild mustangs sweeping up imperiled daughters of later-grateful ranch owners, and saving them from the burning prairie. Pure Hopalong Cassidy.

“I lived for the one art period that redeemed the soul-rasping days of readin’, writin’, ciperin’ and suf-ferin’. I believe I spent ninety-five percent of class time decorating my exercise scribblers. English, Social Studies, Arithmatic; is mattered little to me. These subjects represented just so many square inches of clear margins that made way for cowboys, Indians, zeppelins; whatever took me away from the dead air of the class and the unending drone of a teacher.

Printing class, in high school:
All of us grunts were given an on-going task; that of distributing back into a California Job Case the type that had been set the previous year by Grade 10 students and used in the printing of the school annual. The type was 12 point Century Oldstyle, cast for the school by historic and now long-dead trade typesetter and typefounder Shilvock Parkes. The school composing room had more than twenty cases of this type, so each lad had his own case to diss type into. The object of this tedious job was to teach the student the lay of the case. When the job got just too much to bear we would simply broadcast a handful of type over the case as though planting wheat, and then scratch over it like a cat in a litter box trying to bury the crime. Mr. Tate knew the sound and would come rushing over and catch a person in the act. It was his usual practice to interrupt a boy in his work, take up a composing stick and set a line from the case. If there were any typos he might on rare occasions dump the case on the floor and instruct the lad to put it all back correctly. I think this happened only once or twice, and everyone thought better of attempting to take a short-cut. After the Christmas break we graduated from dissing, since by that time all the text matter had been dealt with. We were then given the treat of setting a few linesin 12 point Century Oldstyle. To this very day Century Oldstyle is one of the very few types that I can’t get too enthusiastic about. Ironically this type was more or less the flagship face on the Linotype in the shop that I was eventually to become apprenticed to.

Jim Rimmer’s first press:
There on the wooden plank floor sat an ancient 8×12 side-lever platen press. Light from a solitary side window washed over the press. Years of dust blanketed it, and blooming morning glory grew up through the planks em-bracing my prize. It was, to put it plainly, a thing of near perfect beauty. Only another printer will understand that sentiment. I bent to brush the dust from the main yoke that spanned the back, revealing in relief the name COLUMBIAN. Smitten, I stood up and asked if he might sell the press, and what the price would be.