Next up in our Letterpress Friend chat is Ben Sargent. A Texas native and avid Chandler & Price printer, Ben is an inspiration for the pursuit of printing knowledge, and offers some good chuckles, and stories. As the conductor of Sargent Brothers Printers & Typographers, he adds a bit of charismatic style that comes only with letterpress.

Boxcar Press: So wonderful to catch up with you and delightful to have you. Speaking of delights… is there one defining moment or point that you just fell hard for printing?

Ben: It was last Christmas. I realized that was the date 60 years prior that my brother and I received our first press and type–a 5×8 Kelsey Excelsior, seven fonts of type, and the whole outfit. While we knew our Dad had been a printer in boyhood and we had grown up around the hot-type composing room of the Amarillo Globe-News, it was the first experience as “real printers” ourselves, and I never looked back.

Boxcar Press: Tell us about a press you remember fondly (or not so fondly) or one you have now that you prefer to use?

Ben: Three years after I began on the Excelsior mentioned above, Dad brought home the C&P 10×15 Old Series he and his brother had bought as teenagers in 1928. That is the press I use to this day. She is a graceful and hardy specimen from the long-ago era of well-built iron-and-steel machinery. “I love her well and she must love me….”

Boxcar Press: What is something people might not know about you that would surprise them?

Ben: Maybe they don’t know that when I’m not printing, I can often be found swinging on and off moving equipment as a fully licensed but volunteer brakeman and conductor on our local excursion railroad. Can’t keep me away from ancient technology.

Boxcar Press: What is your printing superpower? You definitely have one!

Ben: I usually think there are always people who can do better than I in just about every facet of this trade, but if I had to choose a superpower, maybe it would be the delight I have in continuing to learn things about every aspect of the work, even 60 years into it. Sometimes new techniques, skills, and understandings come from my dear colleagues both young and old. Sometimes there are things I just figure out on my own, but it is always a pleasure to learn one more of the apparently infinite things there are to learn about this craft.

Boxcar Press: Anything you want to reveal about a current project you are working on – even a hint or clue?

Ben: Recently, I had one of the most curious and interesting wedding invitations in the course of printing many, many such projects. The invitation itself is a thin 5 x 4 box. It was a challenge finding people who could do the tasks beyond my capacity such as the necessary die-cutting, duplexing, scoring, and laser-cutting of some tiny holes. Really the only part I had left was doing some letterpress on the inside of the box. But the finished box contains a computer chip the recipient plugs in and then touches the laser-cut openings to play various sound recordings from the happy couple. (The wedding involved a graphic designer and a computer engineer, so there you go.)

Boxcar Press: Given these current “strange” times, what is that one project that you are always going to get to but it just never seems to get done?

Ben: If I had to pick one, might be the 3rd edition of our handset-type specimen book, last published in 2010, and in need of an update. But the deck seems to stay crowded with job work even in strange times, so it does keep getting put off.

Boxcar Press: One last question before you finish your drink, an IPA from Texas-local Pinthouse Brewing called “Electric Jellyfish”, – Do you listen to podcasts or music in your shop while you create?

Ben: I always have my Pandora channels on, which beggar the word “eclectic.” I’ve seen a young typesetter friend’s eyebrows rise when hearing Brubeck–Mercedes Sosa–Gregorian chant–Booker T and the MGs–Tommy Dorsey–Handel–Brazilian bossa nova etc. all in a row.

That was an immensely fun time, Ben. Heartfelt thanks out to you for the cheery chat!  Want to know more? Visit his website: http://sargentbrothersprinters.com/

Since our last visit with ever-charming Ben Sargent of Sargent Brothers Printers & Typographers, we toured his wonderful Texas-based printing abode. A few printing treasures and tools may have been moved around & added to, but Ben’s cheerful demeanor while printing on his C&P 10×15 Old Series has never missed a beat yet. We caught up again with Ben between ink runs to see how the printing tradition still runs strong in his family (like father, like son), why the down-home feel of a good letterpress print shop can’t be beat, and scored some nifty inking tricks to use on an older platen press. 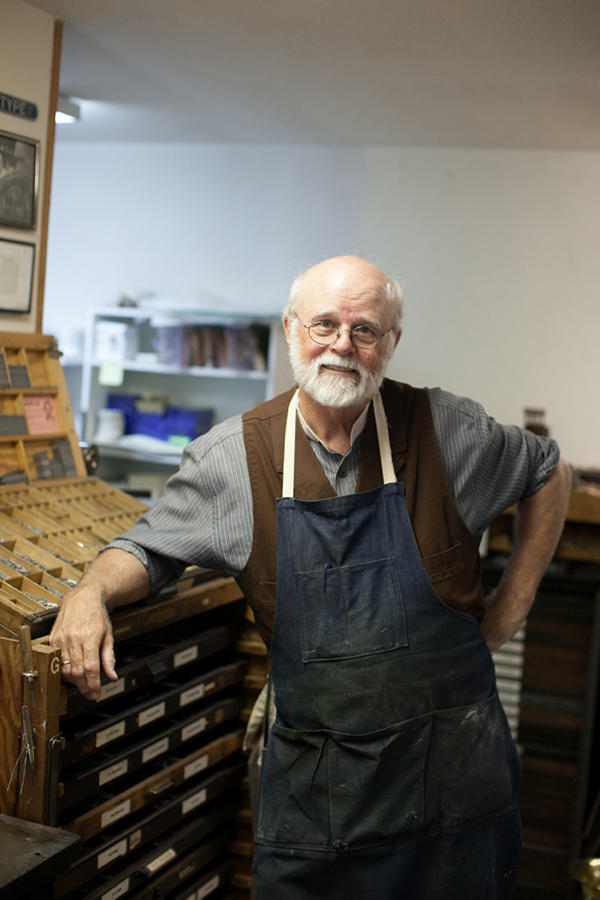 INK IN THE BLOOD I was born and grew up on the windy plains of the Texas Panhandle, where I learned the printing trade from my father. After getting a journalism degree from the University of Texas and putting in a few years as a reporter, I spent the next 35 years drawing political cartoons for the Austin American-Statesman. Retirement from that job gave me ample time to pursue my original trade, and I am enjoying it hugely. 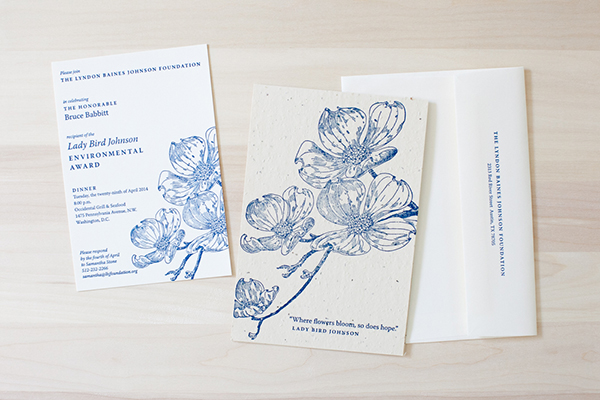 TEXAN TREASURE I’m fortunate enough to have a big enough property in South Austin to have built a nice little house (my one architectural accomplishment) as a home for the printing shop, and it is very satisfying to have a space built just for printing, not in the way of anything else. (Okay, it does also include a model-railroad layout along the walls above the type cabinets.) 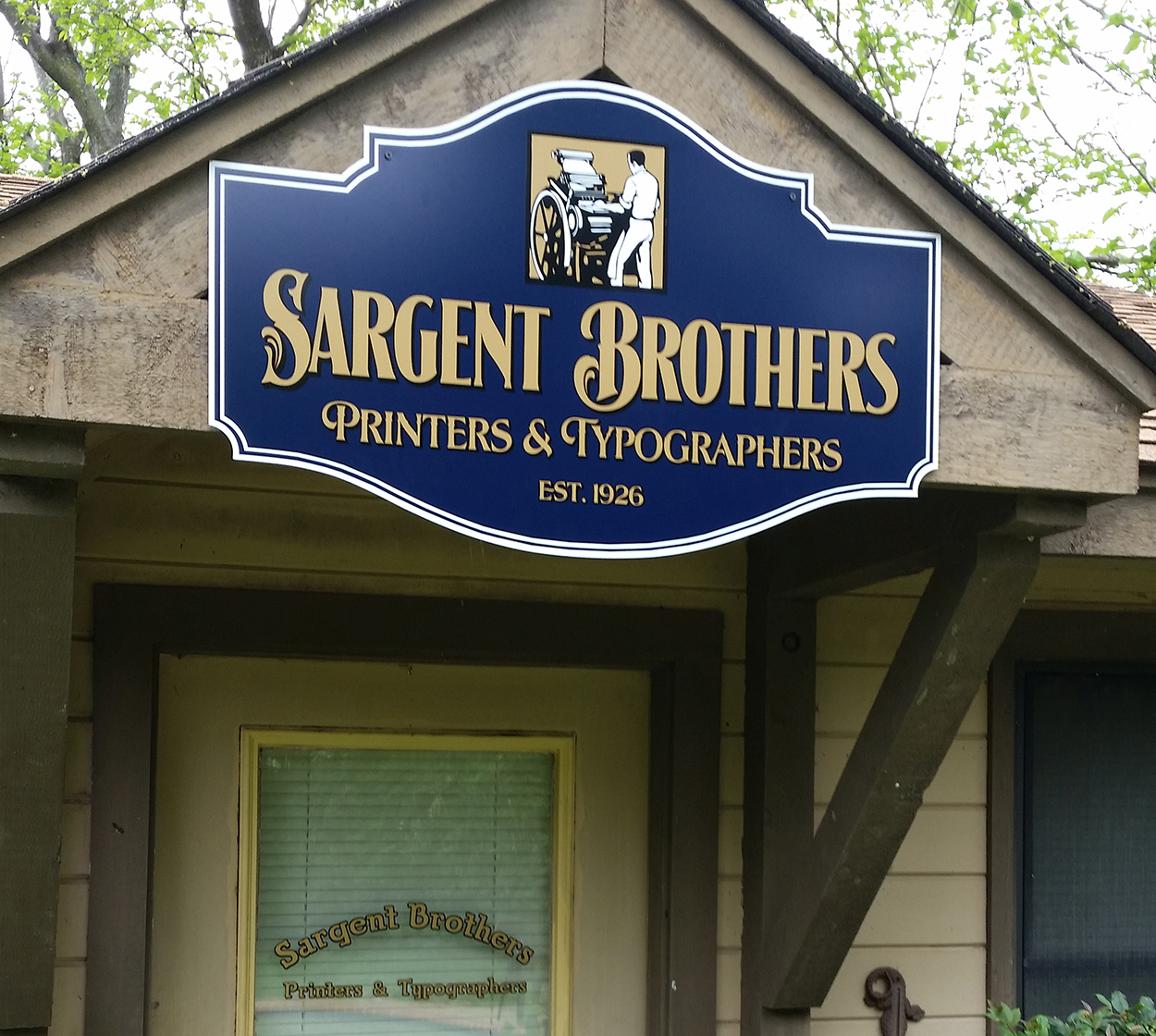 FOR THE LOVE OF LETTERPRESS My father and his brother (the original “Sargent Brothers”) took up the trade as teenagers in Fort Worth in the ‘20s, and while newspaper careers took them both away from printing for many years, my dad got back into the trade when I was 12 years old. He purchased a Kelsey outfit with which he taught the craft to me and to my brother. Three years later, he brought the C&P 10×15 Old Series job press of his boyhood back home, and that is still the press I use today.

DESIGNED TO PRINT I enjoy designing printing, especially if it’s with metal type, but for almost all my commercial jobs I defer to the excellent creative efforts of the several graphic designers with whom I work. 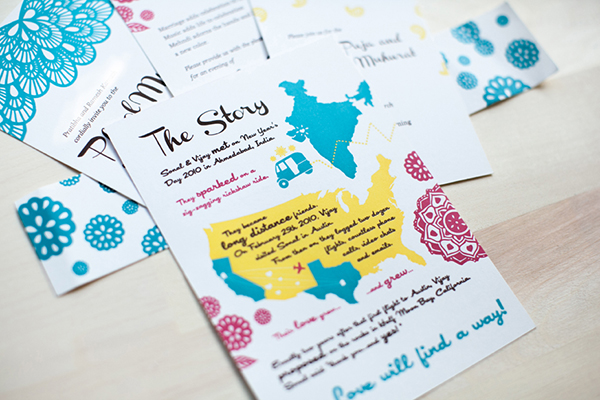 FULL TIME Since my schedule is my own these days, I guess one could say that printing is not only full-time, but 24-7, since I can take care of a client’s needs whenever fits their schedule. It’s been thus since I left regular syndicated cartooning a year or so ago, freeing me up to devote more time to the trade.

PRINTING FEATS I see that as the goal, however imperfectly achieved, of every job we do, to give the customer something we’re proud to stand behind. Still, there are certainly some pieces we’ve done over the years that do stand out, and I have a particularly fond regard for the various little handset books we’ve published (including two editions of our specimen book, and a brief history of the platen job press, published to commemorate the centennial of my press back in 2005). 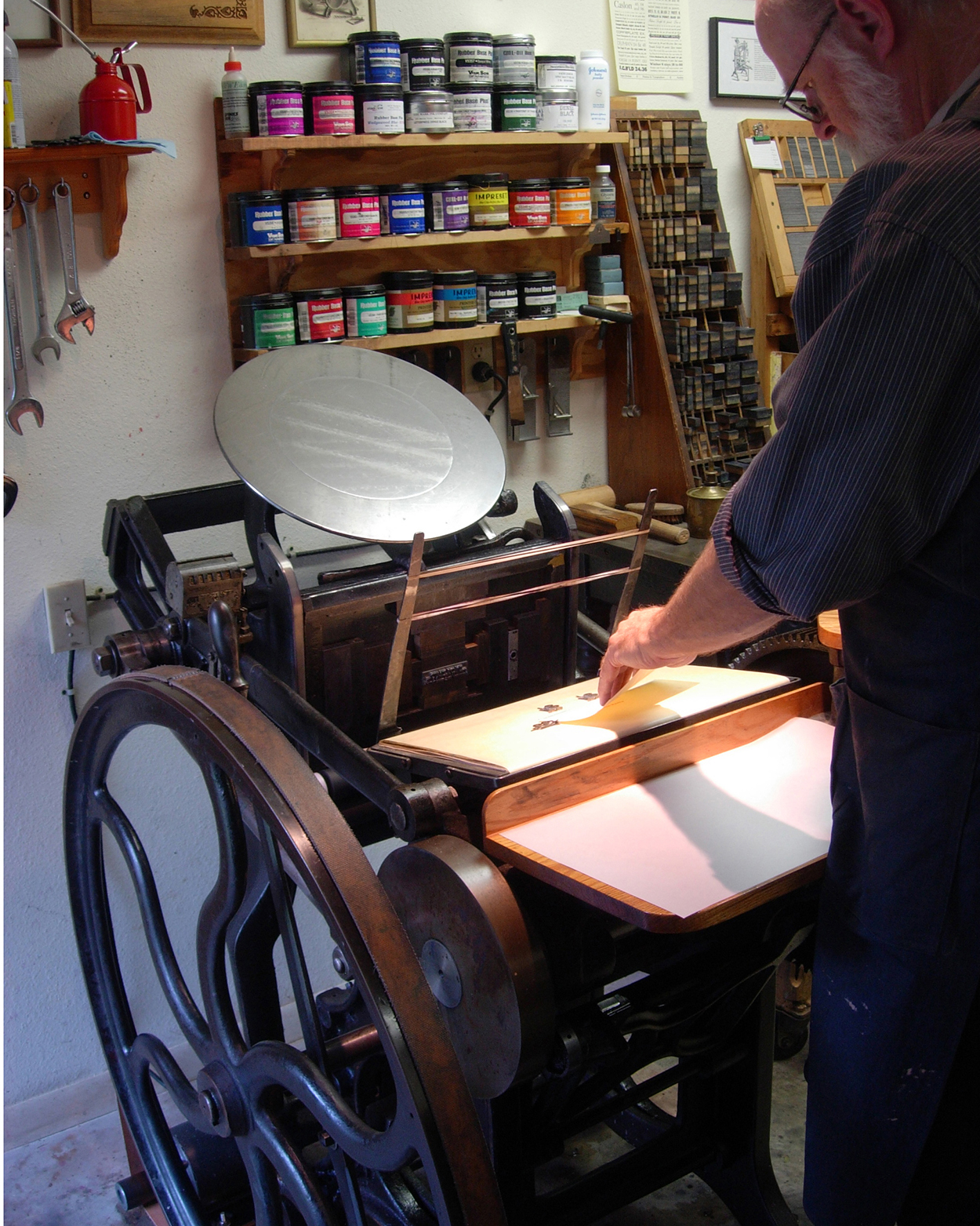 BOXCAR’S ROLE Oh, goodness, since almost all my commercial jobs are printed with Boxcar plates, it’s fair to say Boxcar is the sine qua non of our business. The plates themselves are always flawless, of course, and the service always timely, but by far the best part is the personal touch by which the staff, particularly Rebecca Miller, are always available and cheerfully willing to help us through the occasional digital-file nightmare, etc. I know you must have other customers, but I am always made to feel like Boxcar is there just waiting to meet Sargent Brothers’ needs. Thanks!

FIRST PRESS I learned the fundamentals on a Kelsey 5×8 Excelsior.

SHOP TIPS I think every printer, particularly one such as I who mostly works by himself, probably comes up over the years with dozens of tricks and techniques as he puzzles his way out of particular problems and situations, until they become just part of the craft, and he forgets they were once experimental innovations.

I can think of a few we’ve come up with, and they are probably worth some separate blog entries, so I’ll just cite one we’ve been having some luck with lately. Everybody who uses one of the older platen jobbers such as ours knows that the relatively unsophisticated inking system sometimes requires a little ingenuity in the case of relatively broad inked images. (Not big, huge color floods….with those I have learned the wise adage of one of my colleagues that “in letterpress, sometimes it’s okay just to say no.”). But for reasonable-sized bold areas, I’ve found they can be conquered with a couple of drops of something like Smooth Lith in the ink mix, and with providing a soft place for the impression to land, either by putting a couple of sheets of newsprint between tympan and pressboard, or even pasting some newsprint directly on the tympan (particularly if one is just trying to cover some limited areas). Also helps to “skip-feed” the pieces, so the ink has a little extra time to recover between impressions, and in some cases to go to the trouble of making the design into two press runs, one for the bold areas and one for the finer images. And I’m always receptive to anyone else’s ideas for this conundrum!

WHAT’S NEXT Job work has reached a fairly steady and comfortable level over here, and we look forward to getting the word about our offerings further out by word-of-mouth and our website. I’ve also had the privilege of working with a few young newcomers to the trade, and hope to continue in that way to keep letterpress thriving and growing.

A mighty round of thanks go out to Ben of Sargent Brothers Printers & Typographers for letting us take another peek into his sublime printing paradise.