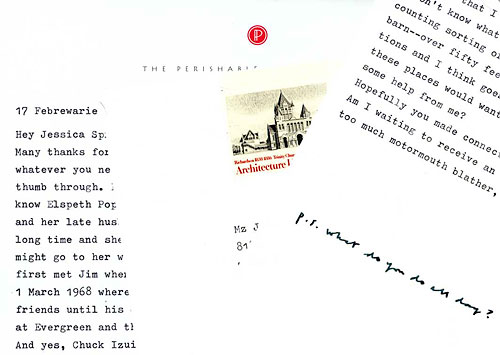 Once upon a time, back when photopolymer was a newfangled thing for letterpress printers, Chuck Izui gave me a call from Aiko’s. Aiko’s Art Materials was founded by Aiko Nakane in Chicago fifty years ago. Chuck Izui worked there nearly 30 years, taking over ownership and continually providing exquisite art supplies in a warm-fuzzy-yet-zen environment. The store will close this April leaving a huge void. He was putting together a show at the store for Walter Hamady Book artist, professor, papermaker, letterpress printer Walter Samuel Haatoum Hamady was born in Flint, Michigan in 1940. Species: homo ludens. and wanted a little card to announce the event. It should be understated (like Aiko’s) yet not too stuffy or serious (like Walter). I was honored, yet petrified at the prospect of designing and printing work for a book arts luminary. Chuck broke out some gorgeous handmade kozo for the project, adding to my fears. I wrestled with a decision for days over what to do. I had limited type and the piece called for a lot of “P”s, propelling me towards the use of photopolymer. Wouldn’t Mr. Hamady be horrified? 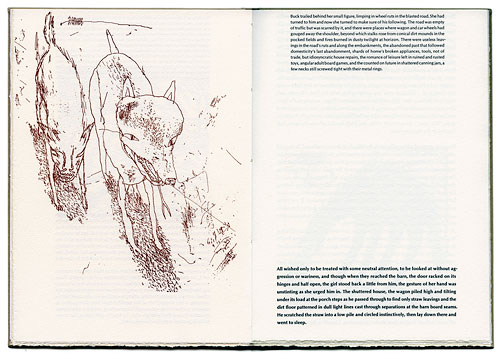 Many years later when it’s hard to find a letterpress printer NOT using photopolymer, Boxcar Press emails. They’re putting together a new website and hope to start with an interview of Walter Hamady. Again I’m honored to be asked, but still petrified. Walter Hamady has been the proprietor of The Perishable Press Limited since 1964, publishing 130 books, collaborating with numerous authors and artists, such as Toby Olson and Paul Auster. His books See some of his work at Vamp & Tramp Booksellers or check out this 2.1 MB PDF 4-page catalog from fine press dealer Priscilla Juvelis, Inc. have been consistently been awarded AIGA’s 50 Books/50 Covers, undoubtedly influencing graphic designers and the commercial world where their work appears. He taught for more than 30 years at the University of Wisconsin at Madison with a list of students that reads like a Letterpress Who’s Who: Walter Tisdale, Caren Heft, Barbara Tetenbaum, Amos Kennedy, Jeff Morin, Kathy Kuehn. With numerous exhibitions in his career, curators and colleagues have poured over Hamady’s books, sculptures and collages, extolling his prodigious talents with finely crafted prose. 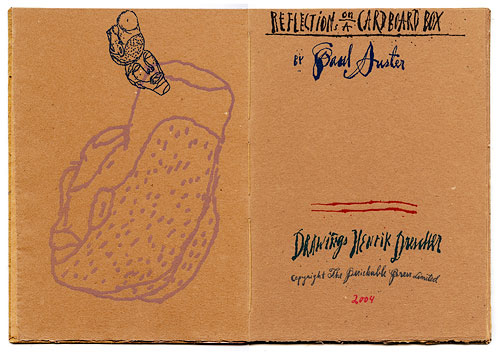 Page spread: Reflections on a Carboard Box by Paul Auster, illustrated by Henrik Drescher, 2004. Verso is Drescher illustration of three heads falling, recto is title page. This title was a recipient of the American Institute of Graphic Arts Fifty Books/Fifty Covers.

Our interview begins by snail mail Hamady uses a typewriter, one with red/black ribbon. His wife Anna is the official word processor, hard at work transcribing Hamady’s journals. These transcriptions will be part of Hamady’s next project, “A Timeline of Sorts” which will gather bits and pieces recorded beginning in 1963 when he was an undergrad at Wayne State in Detroit.and I start the ball rolling with our Aiko’s connection, tentatively broaching the photopolymer question. Years later, I’m still curious. I seal up the envelope using some vintage Gutenberg stamps for luck. Within a week, an envelope arrives postmarked Mt. Horeb, Wisconsin, where Hamady lives with his wife Anna on a farm not far from Madison. His Vandercook A non-motorized SP-15, which requires hand-cranking for ink distribution. is set up in the farmhouse parlour and papermaking takes place in the barn. Hamady responds in a perfectly typewritten letter dated “17 Febrewarie 2008”:

“Why would anyone be horrified by the use of polymer plates? Who cares HOW you get there, just get there, no?”

I like this guy, this self-described “heretic aethiest curmuddgeon irrasible,” nutty spelling and all. I breathe a small sigh of relief, and continue reading. Hamady suggests I can see his books by contacting Elspeth Pope, Elspeth Pope is a retired librarian, hobby printer and Director of Hypatia-in-the-Woods, a retreat for women in the arts, which includes a letterpress shop. When she and Jim were married, she told him she’d rather have a printing press than a diamond ring. She got an SP-15 with a motor. who lives about an hour away. Elspeth’s late husband Jim Holly From Hamady’s journal entry from Friday, March 1, 1968: “Meet Mr. Holly at Macalester. (When we met, I don’t remember all the details, the weather was probably gray and cold, and I remember I had a huge great coat from Army Surplus that just about went to the ground with great double-breasted big lapels. The point is that meeting Jim Holly who was the Librarian at Macalester College and you know he looked at the work and just not any screwing around he wants a standing order for this stuff. No pussy footing, no dickering, nothing vague about it. It was just an honest straight up saying hey man he recognizes this is something interesting, and something slightly unusual and he wants a piece of the action. I guess that’s part of my good fortune through all of this. I met a lot of really wonderful, straight-up, pivotal people with clear minds and clear ideas.)” placed a standing order for Hamady’s work in 1968 while a librarian at Macalester College, which Elspeth has maintained. 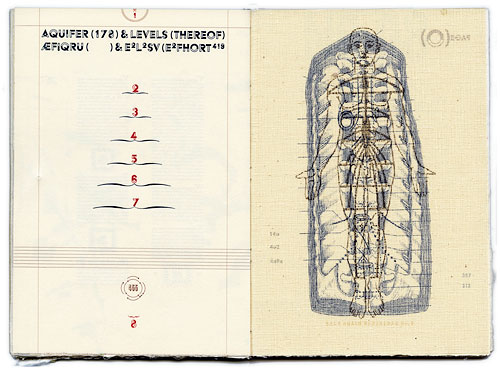 Page spread: Gabberjabb No. 8 9/16: Hunkering, 2005. Verso is “Aquifer & Levels“ w/ vertical arrangement of brackets, recto is illustration of spinal cavity overlayed with anatomical male figure diagram printed on. This title was a recipient of the American Institute of Graphic Arts Fifty Books/Fifty Covers.

Elspeth has agreed to share her collection of books with me and Catherine Michaelis, Catherine is the proprietor of May Day Press. I knew her artist booksâ€”all innovative structures that glorify the natural world from seeds to signs of rainâ€”through Aiko’s, where they were sold. Catherine took me under her wings when I moved from Chicago to the Pacific Northwest, and we’ve been fast friends ever since. who lives nearby and has been helping Elspeth get the Hypatia shop in good order. We sit at a small table in the living room surrounded by windows full of evergreens, poring over a large stack of Perishable Press books. The stack includes some of Hamady’s Interminable Gabberjabbs, Artist and critical writer Buzz Spector describes the Gabberjabbs: “The writing itself, in its typographic variety, but more importantly, in its linguistic indiscretions, adopts the multitudinous cadences of seduction-imprecations, ejaculations, double entendres, baby talk, breathless extensions of sentencesâ€”to draw the reader ever more deeply into the situation. And the situation is one of apparently delirious excess. Like the dancer in a burlesque hall, however, Hamady’s shakes and shimmers are quite deliberately choreographed. Rather than transports of unselfconscious bliss, his effects are enlisted in the service an amorous projection: the book form as the body of the beloved.” a series begun in 1976 that features every manner of page treatment, from collage, rubberstamping, drilling, numbering, corner rounding to cow’s ear-tattooing. The letterpress printing is crisp and flawless, biting into handmade paper with deckled edges in a variety of earthy colors. We marvel at the generous use of paper, with blank spreads as a prelude to a page with just one line of text: “this whole page set aside mostly for visual resting and quiet reflection.”

Catherine aptly describes the work as “excessively obsessive,” full of numbers, page-long colophons, no details left out. The bindings are solid and gorgeous, but they don’t steal the show from the words, the letters, and the spaces between. 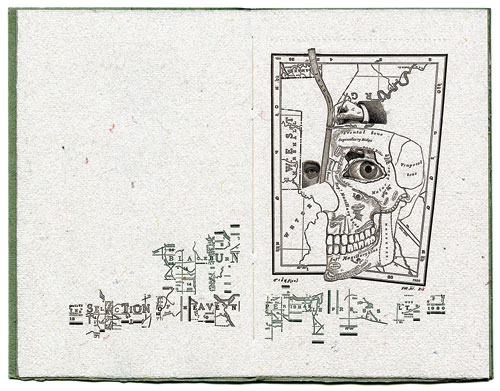 Page spread: Title page from The Selection of Heaven by Paul Blackburn, illustrated by Walter Hamady, 1980.

I am particularly entranced by a huge folder of ephemera containing years of extra goodies sent to Jim and Elspeth as friends and subscribers. There are snapshots of Hamady, proofs for books in progress, and Hamady’s diatribes against invasions of his privacy. Just as carefully designed and printed as the books, the text draws in the reader then bites. One flyer easily confused with a 16th century title page begins “stick that fatt finger in your ugly nostril or some other grateful orifice or at any risk keep it away from that telephone dial!” and concludes in generously leaded six point type:

“Do people who so mindlessly pick up the phone ever consider that they might actually be interrupting some personal act such as composing random elements into their Self-destined harmonius order, or, even the Peaceful voiding of One’s excrement? It is a clear fact that considerate people can usually avoid the use of mr Bell’s invention just as good drivers do not need to use their loud horns.”

Time at Elspeth’s flies by, an inspiring glimpse at decades of tremendously hard work, attention to detail, a curious mind and most of all a great sense of humor. I return home to reread my Hamady letters, in particular his response to a question about his sources of inspiration. What would he ask Aldus Manutius Born 1450 in Rome, Aldus Manutius or Aldo Manuzio founded the Aldine Press in Venice. He employed Francesco Griffo as a punchcutter and used his type (including the first italic) to produce the Hypnerotomachia Poliphili in 1499 which combines type and illustration with sublime harmony. or Nicolas Jensen Born in France in 1420, Nicolas Jensen was trained as a goldsmith but became a letter cutter, printer and publisher. While working in Venice, Jenson produced a roman type based on the humanistic scripts of his time. He produced over 150 books, including Eusebius printed in 1470. given the opportunity? His reply makes me laugh, but it’s just right:

“Notto be egotistical, but don’t you think Manutius and Jensen et al would be wanting to ask us the questions? Like rubberbased ink? Polymer plates, scanning and digital printing etc etc etc? Am sure they would be tickled to see little hand operations like the one here in the parlour of this old farmhouse, see a grown man get off on the â€˜feel’ of the impression coming up the arm through the hand crank handle.”

Read more of Hamady’s original writing: So What, Some What’s in the So (one of the Ramble Rambles) 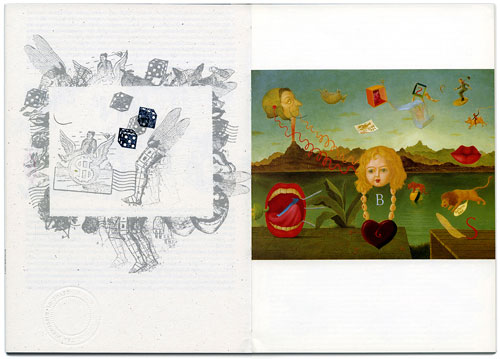 Page spread: 1985, The Twelve Months, 1992. Verso is illustrated with rubber stamp collage by Walter Hamady, recto displays a reproduction of a painting by John Wilde in response to Hamady text celebrating the month of June. This title was a recipient of the American Institute of Graphic Arts Fifty Books/Fifty Covers.

2 thoughts on “wHaT wOuLd wAlteR dO?”