A whirlwind of creative energy, Ted Ollier of the Bow & Arrow Press & Mindhue Studio is a creative tour-de-force who loves blending art & education via letterpress (and with gusto we might add). When he’s not getting students and the letterpress-curious up to speed at the Crash Courses and Open Press Nights found at the Bow & Arrow Press at Harvard University, Ted moves deftly from part-time teaching to pursuing his own fascination with typesetting, designing conceptual artwork, playing bass, and the enjoying the thrill of finding type still wrapped in foundry sealed wax paper. We caught up with Ted amidst the fun to see why the fascination with printing still reigns supreme. 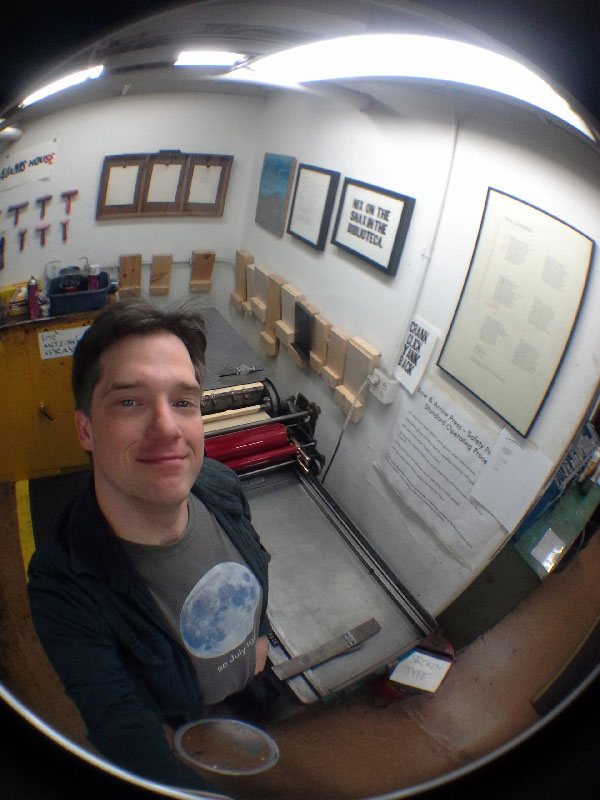 PRINTING DEXTERITY I was born in Toledo, moved to Austin during the 80’s Rust Bowl, and moved to Boston in 2008. I have a BA in Liberal Arts from the University of Texas at Austin, a BFA in Studio Art and Communication Design from Texas State University, and an MFA from Massachusetts College of Art. I’ve been a designer, prepress technician, type designer, printmaker, photographer, bass player and artist at various times in my life, sometimes all at once. My BFA concentration was in metalwork and fine art printmaking, and I worked prepress and design in a small offset litho shop in Austin while I was getting that degree. That dual experience — seeing printing both as an art and as a business — definitely has come in handy dealing with letterpress.

LOVE AT FIRST SIGHT A friend of mine was running the Bow & Arrow Press, a letterpress shoehorned into the basement of Adams House, a residence hall at Harvard University. When I moved to Boston, he asked me if I’d like to take it over, as he had other projects coming up. I did, and the rest is history.

THE PRINTING BEAT IN BOSTON We’re shoehorned into three-and-a-half connected rooms in the basement of the Adams House Residence Hall. Odd corners, protuberances, closets and shelving are just part and parcel of the Bow & Arrow experience. We have a Vandercook No. 4, a Vandercook SP-20, an old Vandercook roller press, a C&P Pilot tabletop press, a Charles Brand intaglio press, and two museum pieces: a C&P windmill press and a Pearl treadle press. The Pearl is, alas, too fragile to run and I don’t really trust the C&P around so many inexperienced people, so they stay quiet. The Charles Brand intaglio press is our most recent addition, donated by a printmaking colleague of mine, and it’s nice to be able to demonstrate forms of printing even more obsolete than letterpress. 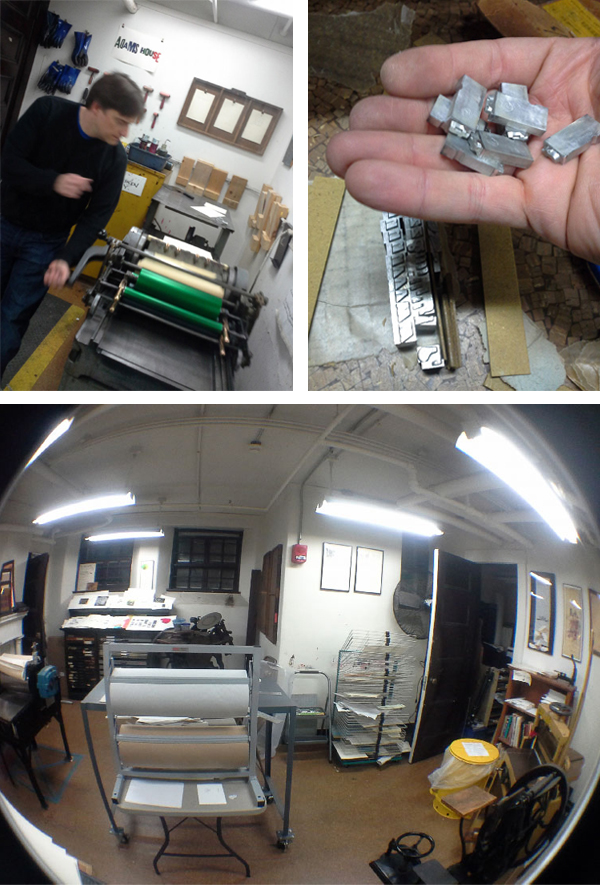 Our type is old and has not always been handled properly, but that doesn’t stop people from setting amazing things with it. Some of my favorite faces in our collection are a nice selection of Futura Light, a nice selection of Stymie, a case of New Century Schoolbook, and a case of Kennerly Italic. We also have more than 500 printing plates and linoleum blocks in our library. 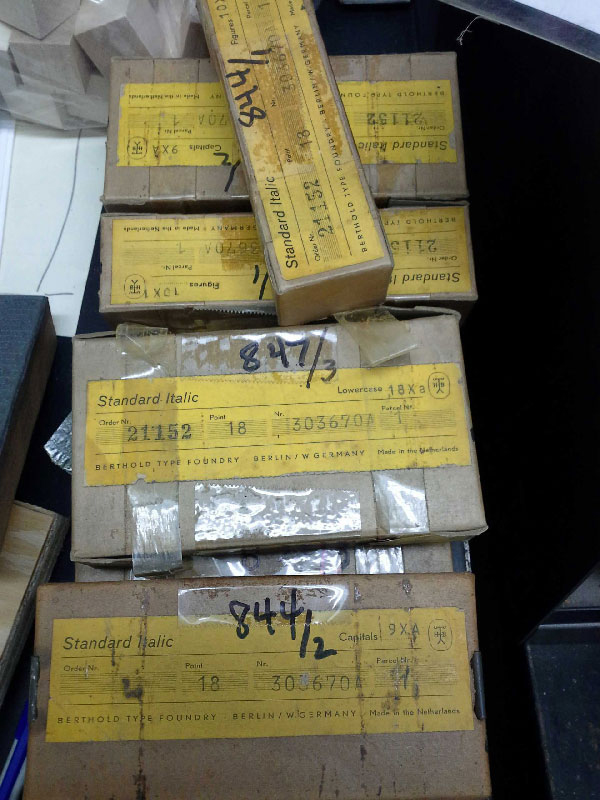 We have the full complement of rubber-based PANTONE inks, and have an uncoated guidebook for mixing custom colors. We use California Wash, NTT type wash, and Super Rubber Rejuvenator. I’ve heard there is some controversy about SRR in letterpress circles, but judicious use over the last five years has kept my rollers looking as smooth and matte as the day we installed them. We have a small manual Challenge guillotine cutter, and the usual complement of composing sticks, pica sticks, leads, spaces, coppers, chases, quoins, keys and other ancillaries.

THE CREATIVE PROCESS I’m both a designer and printer. It depends on if it’s for a commercial job or for my own artwork. The commercial jobs tend to be relatively straightforward: legible type, minimum of ornamentation, some judicious color if that’s what the client wants. These days it’s an uphill run explaining the concept of spot color or the limitations of the letterpress to people who are used to immediate CMYKOG inkjet printing, but it usually works out to everyone’s satisfaction. I definitely subscribe to the idea that design is there to facilitate the transfer of information, rather than a chance for an art director to demonstrate some faddish stylization or pointless gingerbread.

My own artwork, on the other hand, is heavily conceptual and very intellectual. I spend quite some time tweaking and mulling the concepts that I find intriguing and compelling, and then thinking about what’s going to end up on the paper. That said, I try as best as I can to distill things down so that someone seeing the images for the first time will find them interesting enough to explore the concept further, rather than be put off by a hermetic sterility or ivory-tower isolation. My main intention is to get people to see these ideas in the same fascinating light that I do. This desire to show and share interesting information about the world keeps me from getting too far into outer space — at least that’s what I hope. 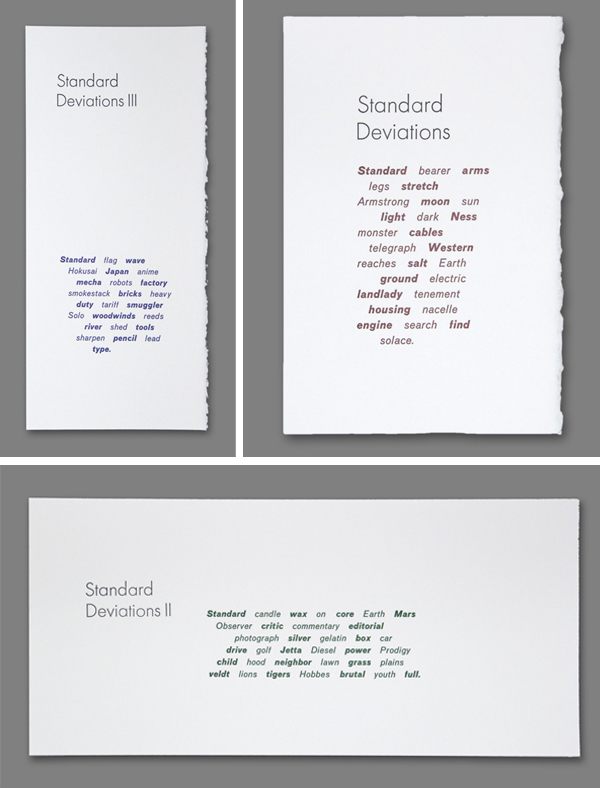 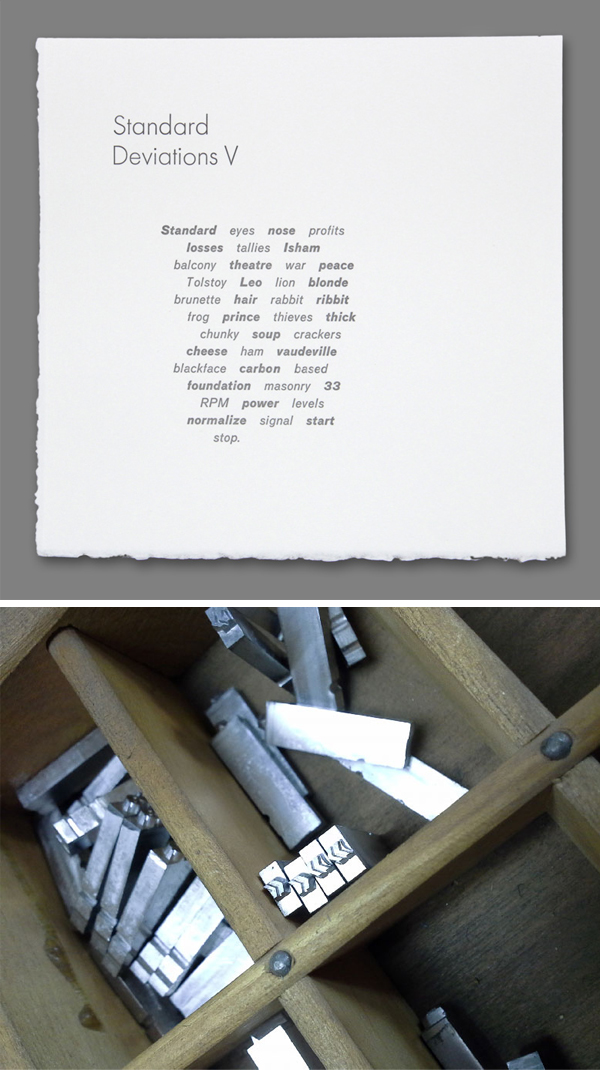 FULL TIME FUN I also teach part-time, and have a day job doing scanning and Photoshop work, along with some intermittent design. I’ve taught printmaking and intro graphic design, and recently I’ve been able to use the Bow & Arrow Press to teach letterpress and intaglio. That’s wonderful because I’m able to keep the Press busy and engage students in a more formal teaching environment than our informal classes and open press hours. Plus, the heightened visibility of the Press has allowed us to work with people from all over campus, including the Harvard Summer School, the Harvard Extension School, the Graduate School of Design, and the Department of Visual and Environmental Studies. Printing is only one of the several hats I wear, but I’d love to do more of it. 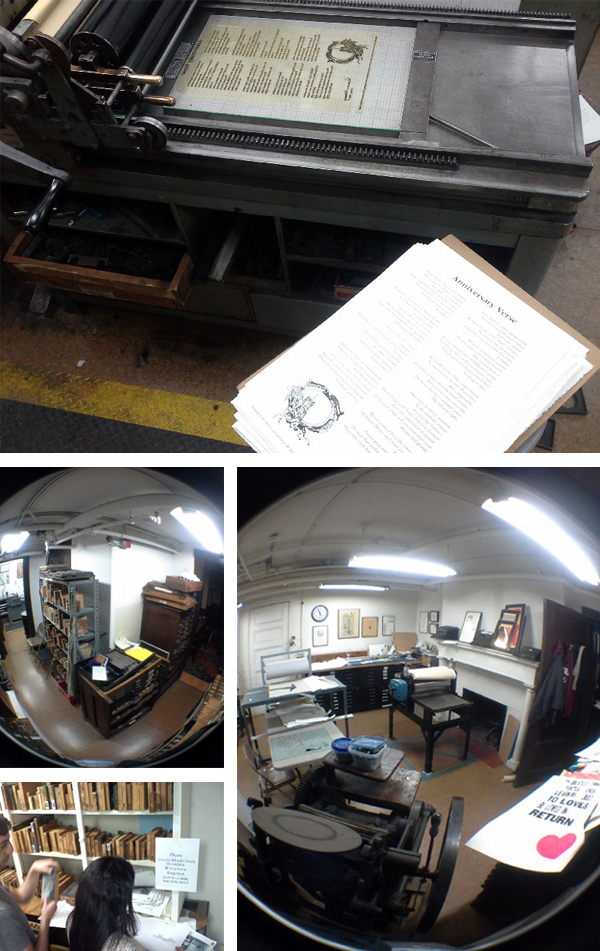 PRINTING FEATS When I got to the Bow & Arrow Press, it was somewhat underutilized and chaotic, and although I had printmaking experience, I didn’t have much printing experience. In the last six years, with the help of many of the people who run Adams House, I’ve been able to grow the Press into a bright, busy, organized place. Since we reside in a undergraduate dormitory, we are required to have Open Press Nights where students (and others) can come to see what this obsolete printing process is all about. Through weekend Crash Courses supplementing these Open Press Nights, we’ve enabled the Press to accrete a growing population of people who keep coming to explore not only typesetting, but also bookmaking, relief printing, engraving and drypoint, page layout and imposition, and many other things. Through all of this, and probably because of it, I’ve also been able to find my way toward gaining experience as a letterpress printer. Nowadays, I’m very pleased that I can run multi-color tight-registration jobs with a reasonable throughput on both our Vandercook No. 4 and Vandercook SP-20. 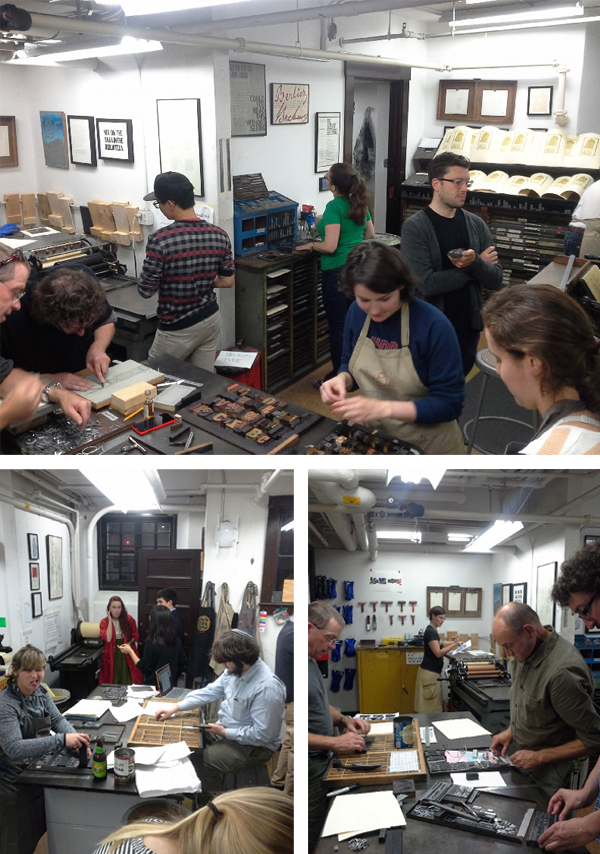 PRESS HISTORY The first press I ran was the Vandercook No. 4 that has pride of place at the Bow & Arrow Press. It’s still my favorite. It’s small, but it’s bulletproof, and I’ve been very pleased with the registration I’ve been able to get on what is supposed to be a proofing press.

BOXCAR’S ROLE Boxcar Press has been an integral part of this whole thing from the very beginning. I know that letterpress people are supposed to extoll the romance of cold lead type and disown anything digital, but when you’re running a four-color design with modern typefaces, complex line art, and a final emboss, it’s time to examine one’s base assumptions. It’s the final product that really matters. Designers can be just as obsessive with thousandth-em kerning in Illustrator or InDesign as they can be with coppers or brasses, and with OpenType glyph sets, you have more ligatures, swashes and ornaments than you really know what to do with. That’s not to say I don’t bliss out when sitting down to typeset with the font of Standard Italic 18-pt that I found at Letterpress Things in Chicopee still wrapped in foundry-sealed wax paper and binding string, but one has to recognize that there are things that formalized lead typesetting cannot do. 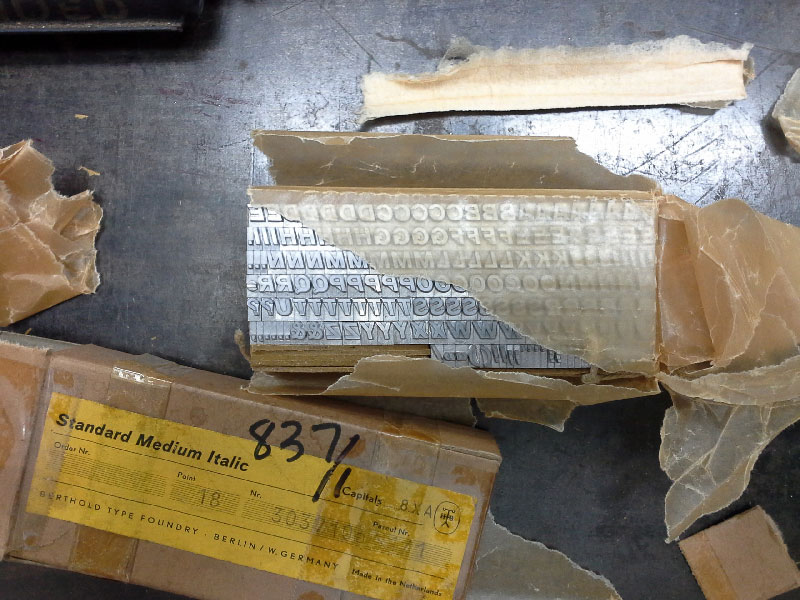 Since I have an extensive technical background in prepress, I haven’t needed the help of Boxcar Press in solving problems, tweaking designs, and fixing trainwrecks as other people might, but I think that’s a bonus for both of us. I think of Boxcar just as I did about the service bureau where I used to get film positives and offset printing plates made back in the day: I send you my files, you process my files, you send me my plates, and I run them. No fuss, no muss. In the five years I’ve been using your services, I’ve only ever had one hiccup in the process, and that was dealt with swiftly. I can’t think of higher praise to give.

SHOP TIPS Running a Press with a substantial public component takes patience and care. At any given time there are probably three or four people in the shop who have never touched a piece of lead type in their lives. Although I have Student Pressmasters and kindly regulars to help smooth over the bumps, the Crash Courses that I started teaching in 2009 have really kept the worst kinds of newbie mistakes to a minimum.

WHAT’S NEXT Recently, some of my regular Open Press attendees and I were able to purchase a Vandercook SP-20 for a joint-use project. We’re still looking around at lease options and way of organizing the business, but our intent is to take some of the lessons learned at the Bow & Arrow and pursue them in an independent venue. Will it become a full-time printing gig? We shall see, as I still love the Bow & Arrow and everything that surrounds it.

Huge round of thanks to Ted for letting us get a sneek peek at both the Bow & Arrow Press and Mindhue Studio!