Through the vibrant thoroughfare of the hustling & bustling Gracia district of Barcelona, Spain you’ll find a cornucopia of artisan shops, studios, ateliers, and little curio shops settled alongside industrial offices. But if you take time to meander into the middle of the city, you’ll feel like walking around a small town where people take the time to cheerily greet you. Move in a little bit more and you’ll find that this small-town hospitality extends into the bright life that buzzes in Granja Grafica, the letterpress shop & home to Gaby & Elies. The printing duo told us about their serendipitous meeting on the other side of world in Tokyo, Japan, and filled us in on the journey that letterpress has taken them on. 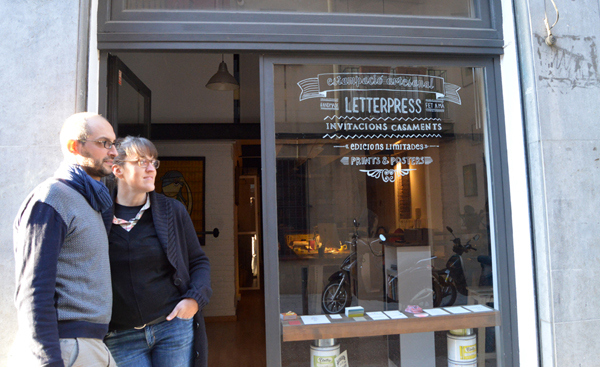 A SERENDIPITOUS MEETING We are Elies and Gaby. A Spanish letterpress printer and an Argentinian graphic designer that met by chance at the door of a hostel in Tokyo back in 2006. It was Gaby’s last day in the city and Elies’ first one, but during dinner we found many things in common and started a long distance – old fashioned – hand lettered friendship for a couple of years. In 2008 we decided to shorten the distances and Gaby moved to Spain. After a year of adaptation, the idea of Granja Grafica started to grow in our minds. 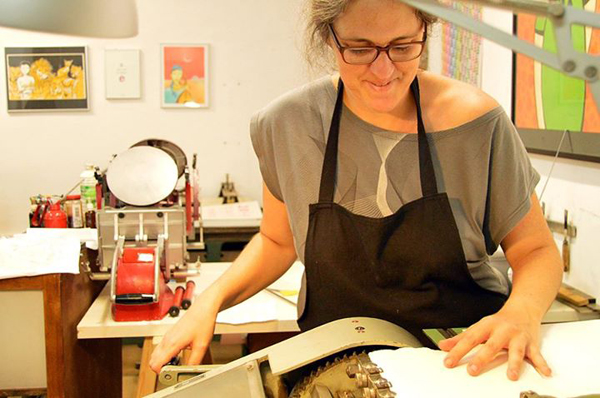 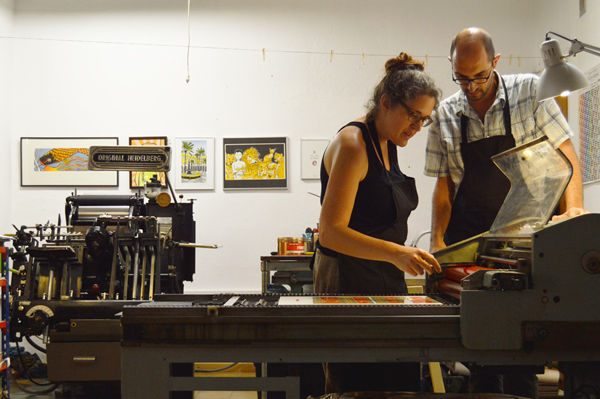 FOR THE LOVE OF LETTERPRESS Elies learned the craftsmanship from his father, Miquel Plana, who dedicated his life producing fine press books in Olot, Spain. He acquired a vast amount of knowledge and experience in engraving, typesetting, printing with platen presses, pochoir printing among many other things. When Gaby met Elies, she was finishing her graphic design degree and decided to do her final paper about letterpress printing. While investigating and observing the craft she developed an interest that went beyond the historical & theoretical learning and started helping Elies with his commissions. 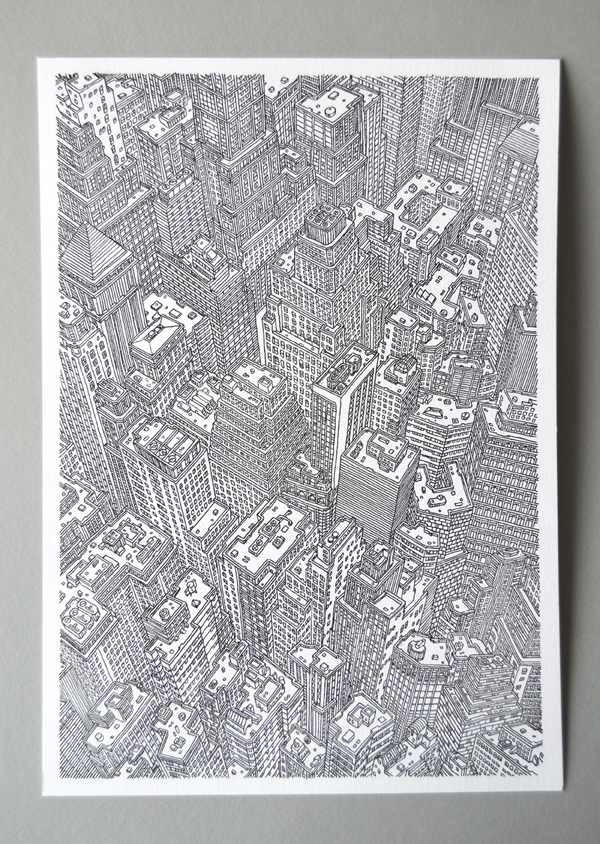 WHERE LETTERPRESS LIVES Back in 2009, we were two newcomers in Barcelona but quickly fell in love with the city. We choose Gracia’s district to open the studio since it’s a very intimate and authentic neighborhood. There are plenty of studios, ateliers, and artisans still working and living in this area of the city. It is one of Barcelona’s most desirable districts since it is full of life, little shops, a great array of bars, places to have a drink, and many plazas where people gather around to watch the colorful life go by. You are in the middle of the city, but you feel like walking around a small town where people still take the time to greet you. 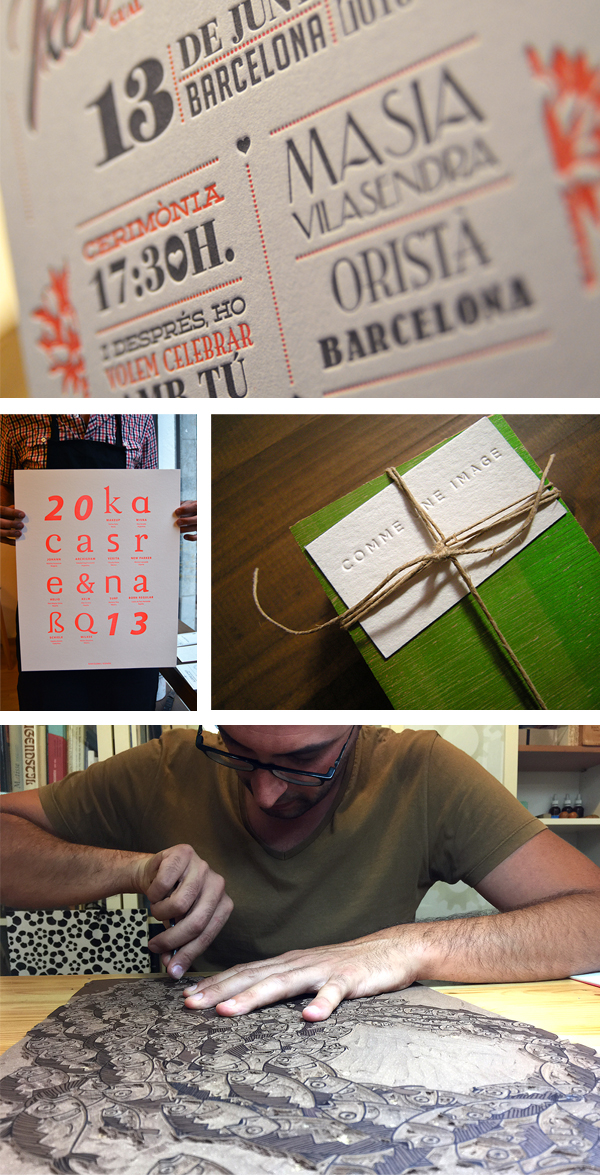 PRINTING MENTORS In letterpress printing we admire the experimentation with different materials in the work of Arcangela Regis here in Barcelona, the amazing and fresh work of Dafi Kühne and the exquisite books of Russell Maret. It is also very inspiring to see the commitment, the quest, and the experimentation of friends’ work, like the ones of Javiera Pintocanales, Dario Zeruto, and Ximena Perez Grobet. 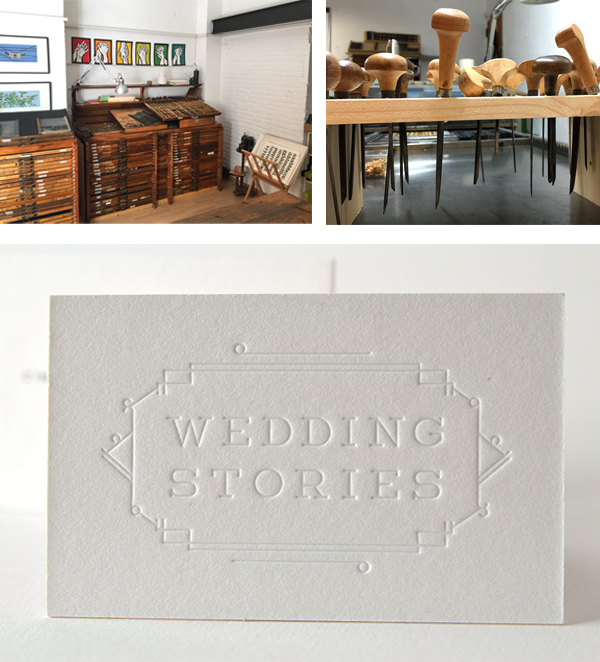 DESIGNED FOR PRINT At first we were doing both design and print projects, but since we don’t have enough time for both, we decided to focus on printing and found some great collaborators for designing. 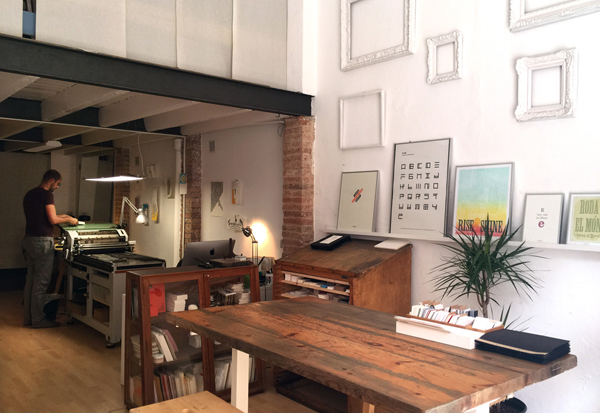 FULL TIME FUN We have been printing full time the last 3 years. That was the original goal and we were very lucky to achieve it, of course it was not only luck, we put a lot of hard work and lots of hours into it. 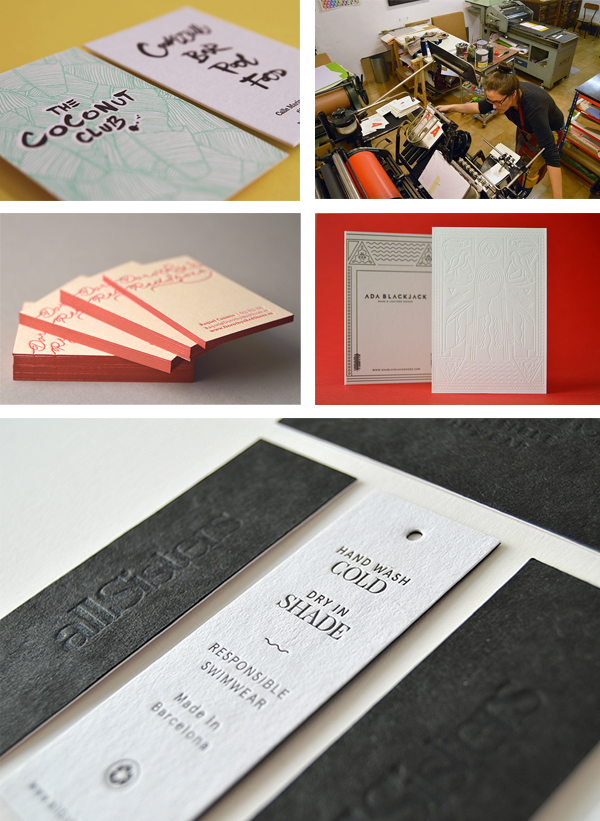 PRINTING FEATS I guess in this past year what we are most proud of is becoming entrepreneurs. Being a letterpress printer is a very easy thing to do if you fall in love with it. Time goes by fast and you are excited to be mixing the ink, preparing the originals, choosing paper, setting up the machines and find yourself already thinking about the next project.

Even though there are some rough patches, for example, when mysteriously the registration is off and you can’t find the way around the machines, and the original manual is in German and you have nowhere to go to for answers! But after a few hours & trials you find that the frustration is gone and you are back to your old enthusiastic self. We learned to be entrepreneurs the hard way. Some days you spend a lot of hours doing budgets, accounting, publicity, social media, and you just want to go fast to the machine and tell her all your sorrows. Some days we even get ink anxiety. But then you realize that all those things are a step in order to achieve what you really love, which is printing, so we learned to cherish this business side and hope that it will last a long time. 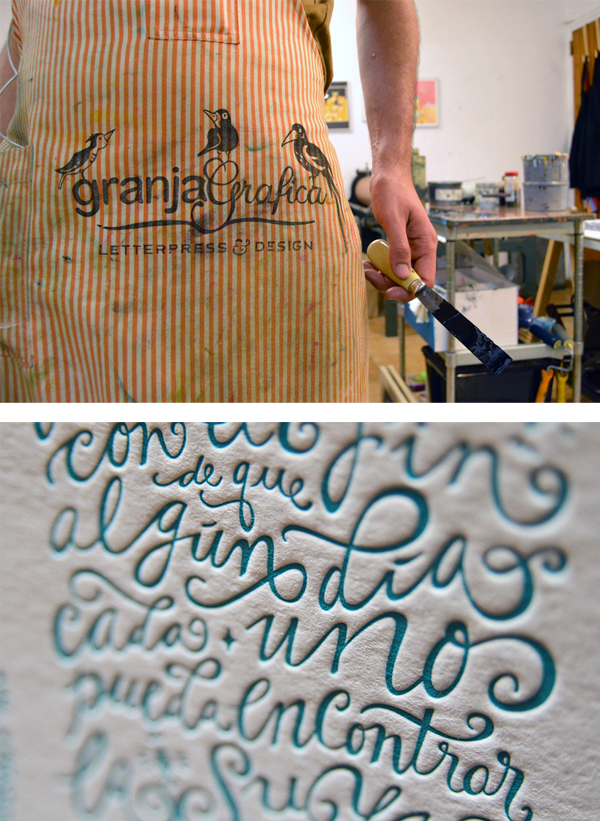 PRESS HISTORY In 2009 when Granja Grafica was only an illusion, we saw a special offer on Ebay for a set of 5 Adanas (Kelseys) in London. We decided to make a car trip through France and come back with the car full of machines and type. I guess machine-traveling became common since last April we did another car trip, this time to Germany to look for the second Korrex (a cylinder press) for the studio. 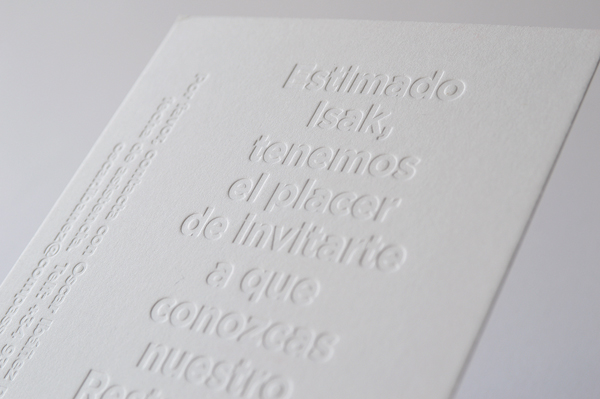 BOXCAR’S ROLE Boxcar has been of a lot of help since the beginning. Our second machine was a Heidelberg Windmill and neither of us had ever used one of them, so we watched the videos and manuals on the site a thousand times! The Boxcar Base helped us to work properly with the polymer plates and last year we were able to visit the headquarters, which was a great experience both in a human and a professional level. 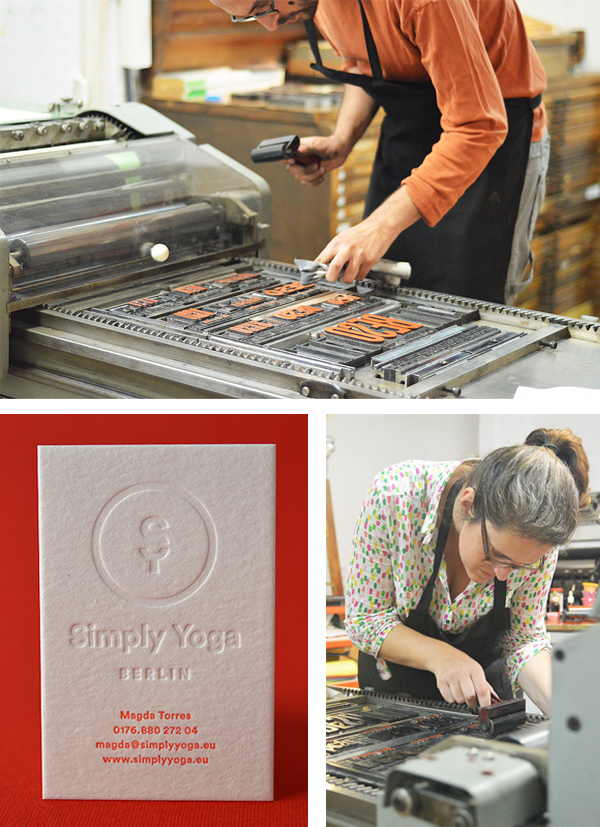 SHOP TIPS I guess the most valuable lesson in everyday printing is to be patient and think that the speed of the craft is not the same as the one in almost every other aspect of our daily life. You need to manage anxiety and develop serenity so as to be aware of all the details in every part of the work and projects. If not, you can’t learn from your mistakes or grow as a printer.

WHAT’S NEXT The past few years graphic design students have approached us wanting to get to know the studio better, since this kind of printing is still very rare in Spain. We would like to have the infrastructure to be able to open it more to the public and share the craft and experiences with the community.

An extraordinary round of applause and thanks out to Elies and Gaby of Granja Grafica! Salud!